THE VIETNAM FUNNY BOOK: (An Antidote To Insanity)

The Trigger Finger and The Freedom Bird
© THFoster 2014

The heart of The Vietnam Funny Book; An Antidote to Insanity was created in 1969 in Nahn Bieu, a small village and the home of CAP 4-2-3 (roving), 4th Combined Action Group. The Prelude reads, "The book was the living testimony of Grunts. It was the tour guide, conceived in a soggy ditch by truth..." CAP (Combined Action Platoon) was a little known Marine, counter-insurgency warfare unit. For those unfamiliar with CAP, the following description is from the renowned military historian, John C. McManus: ”They were the ultimate grunts... More than any other modern combatants, the CAP Grunts in Vietnam experienced the crucial element of human will in war. By necessity, they morphed into rural warriors. In retrospect, the CAPs were the least glamorous but probably the most effective aspect of the ill-fated American war effort in Vietnam.”) I was a grunt in CAP 4-2-3. My other job title was Psychological Operations NCO. The cartoon was a good fit.

Tad, Satch, McGrevey, and Drew in Nahn Bieu, CAP 4.2.3 1969
(Where are you guys? Did you make it, McGrevey?)
In September of 1979, I sent the only prototype of The Vietnam Funny Book; An Antidote To Insanity to The Vietnam Veterans Advisor at Penthouse magazine. The “Advisor” was a man named William Corson, a retired Marine Lt. Col. and author of the book, The Betrayal. Unbeknownst to me at that time, William R. Corson had served as the first C.O. (commanding officer) of the Combined Action Program. On William Corson’s advise, I met with him along with other heavyweight Vietnam Veterans, all bound to take care of our own and to influence an American attitude adjustment. Corson’s blunt response to the book was “The book is too honest for the American public.” His sage advice essentially delivered the kick-start for The Vietnam Funny Book.

One of Corson’s peers present that fall day at The First National Symposium on Vietnam Veterans Affairs was Dean K. Phillips. He later wrote of our chance encounter, "Your art is written in a language that has a message unique to Vietnam combat veterans. I hope you are able to see that many other veterans enjoy its special brand of humor." Captain Dean K. Phillips was a 101st Airborne Ranger and Special Assistant to the Administrator, Veterans Administration. The man’s personal encouragement and support were instrumental, and his words became a shield. Take my word for it; publishing a book in 1979 entitled "The Vietnam Funny Book" was downright difficult. We were not exactly regarded as America's darlings in those days.

The Vietnam Funny Book went to print a year later, officially released on Veterans Day 1980. The only words on the back cover were AMERICAN MADE. The Stars And Stripes, in the following Memorial Day issue, described the book as "an ironic collection of cartoons done in 'Nam by a grunt who paid his dues. It is appropriately subtitled, 'An antidote to insanity' ". The Stars And Stripes further wrote, "There have been a lot of books written about Vietnam, but none like Tad Foster's, The Vietnam Funny Book." "It's a rollicking look at the raw side of that war the Nation still tries to qualify . . . a jolting perspective" and an "alternate to a psychiatrist's couch . . ." (The original review is attached.)

In February 1981, the U.S. Government Dept. of Medicine & Surgery, Veterans Administration purchased 130 books for nationwide distribution to all of the newly formed Vietnam Veterans Outreach Centers throughout the United States. It was the second book to be purchased in bulk on the Vietnam War by this arm of the United States government. The Vietnam Funny Book; An Antidote to Insanity, first Limited Edition became U.S. Government Issue.

Bill Mauldin's take on the book in 1981 was straightforward: "It rings like true silver on the bar." On Mauldin's recommendation, the 2nd edition was printed by his publisher Presidio Press, respected and renowned for military history books. His words went on the back cover of the second edition. I would have the distinct honor of participating in a nationally televised interview with the famous creator of Willy and Joe in WWII. We took aim at the reality surrounding Agent Orange and its mounting body count. (The most recent interview regarding The Vietnam Funny Book was conducted in 2006 on Eleven Bravo with host Rick Seaman (No.#13), Veterans Network.net.) Kudos to Rick Seaman. The CAP corpsman who saved my sorry ass forty-five years ago, 'Doc' Kelly, tracked me down in 2013, by way of that interview.

The Vietnam Funny Book; An Antidote To Insanity is indeed a history book regarding the very backbone of a generation. Over the years, it was excerpted by the U.S. Government (legally in most cases) and grassroots veterans’ newsletters. The Chairman of the National Veterans Task Force on Agent Orange wrote, "I, as well as other veterans, have found it to be a delight." In 1981, The Navy Times wrote, "The Vietnam Funny Book is actually not to be talked about, but to be read." The book has been well regarded over many years by combat veterans, from privates to Four Star Brass. The book's content was neither compromised nor edited for political correctness, to rewrite history or boost marketability. This is evident from the first page to the last. It was a matter of honor to former comrades in arms. As I wrote in the book, "It was drawn from and for the souls who lived it."

There are roughly 3,500 books, new and still cased, remaining from the 3rd edition printing in 1988. The book was printed by R.R. Donnelley & Sons, the printing company for the Encyclopedia Britannica, National Geographic and Time-Life Books. A limited edition of 1,000 books with separate registration in the Library of Congress was printed along with the paperback and standard hardbound editions. 100 copies remain and are hand signed and numbered.

You can buy The Vietnam Funny Book, USED, through Amazon or some rare and out-of-print bookseller. (I have seen some prices for first and second editions that made my jaw drop.) Or you can get one, new out of the printer’s original case, straight from me. I drew it, I wrote it and I’ll sign it. No big fanfare or mega-hype. No returns. The only guarantee is that it is honest . LEATHERNECK could not have put it any better in 2013, ” The Vietnam Funny Book” is 110 pages of ‘there it is’, as we used to say.”

I dedicate this writing to my late father-in-law and dear friend, Darrell (known affectionately as "Love"), a tough, no-nonsense American iron worker from the Heartland. And to my better half and soulmate, Debra Sue.

Copyright ©:TH Foster 2014. No material may be reproduced without written permission. 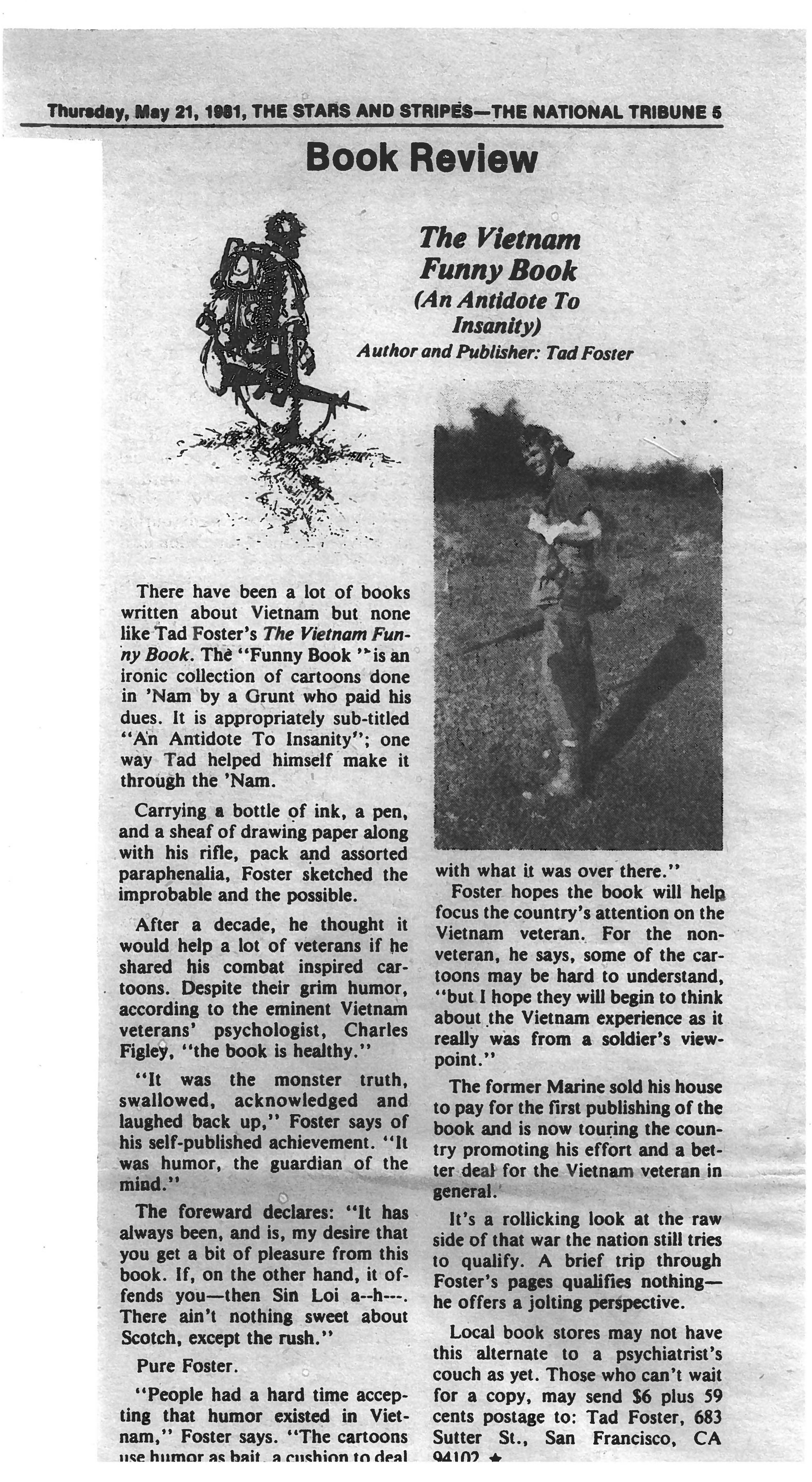 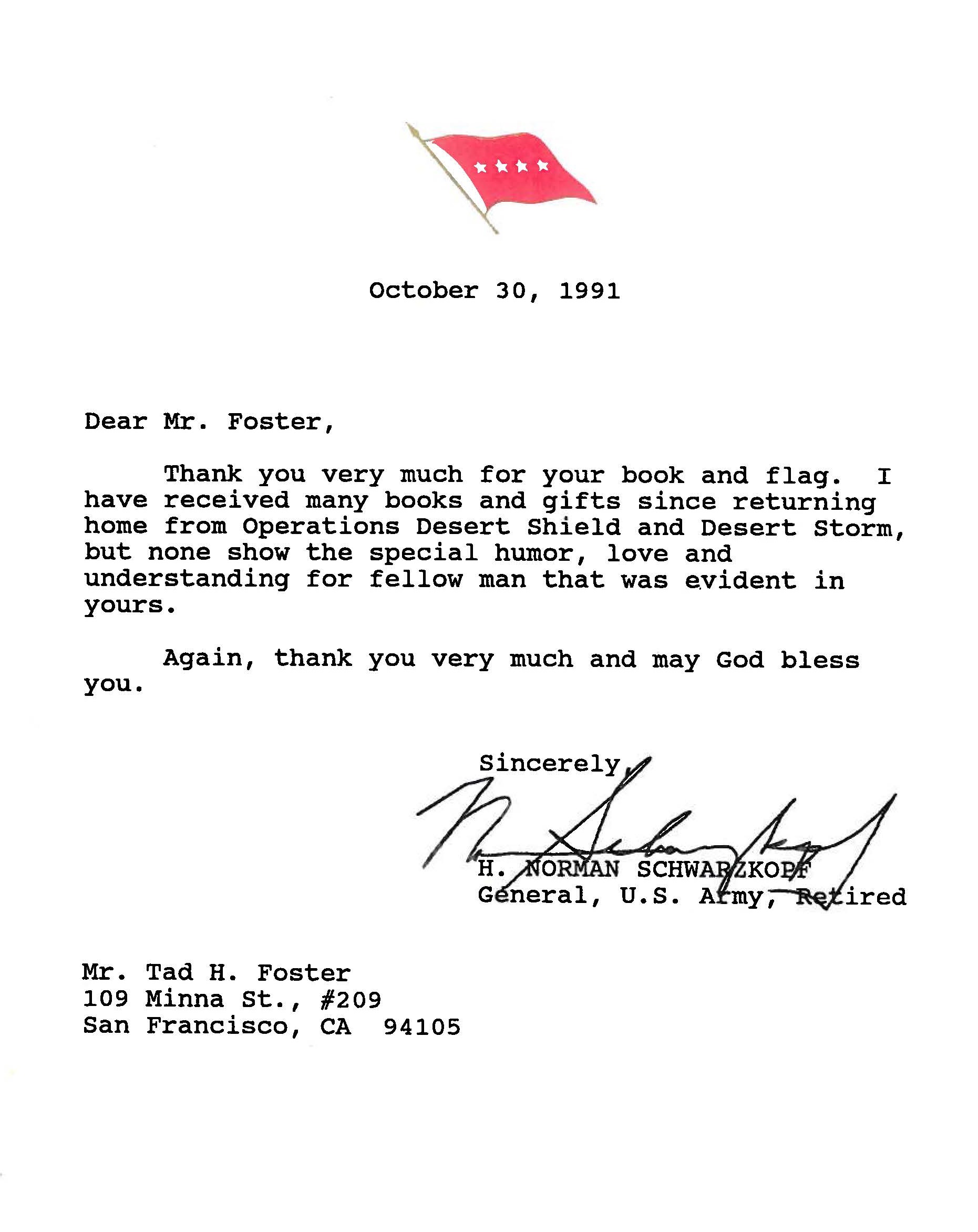